The modern world has turned Philosophy into Science, the pursuit of measurable knowledge. Natural Philosophy has become Natural Science; Metaphysics has become Physical Science, and other areas of study just the same. Even before Socratic philosophy provoked modern ideals, the philosopher Heraclitus (c.504-501BCE) proposed the concept of logos and flux, reflecting a foundation in the law of mass-energy conservation. This foundation is a constantly changing yet unifying understanding of the universe. 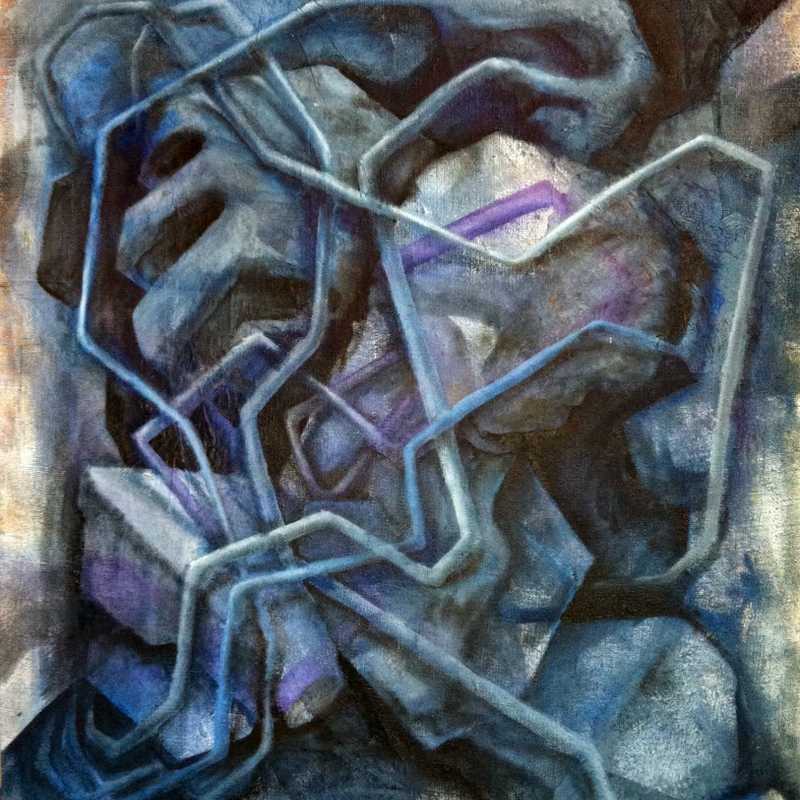 "On the way to Telos"

The thing to understand is that Heraclitus comes to us only through fragments and poetic riddles. Some remnants are quoted by other authors or biographers of Greek philosophers, like Diogenes Laertius, who referenced a single piece of Heraclitic writing in the context of nature. Diogenes’s work is separated into three sections: (1) the universe, (2) politics, and (3) theology.

Mostly considered obscure in his method of dialect, Heraclitus prompted riddled statement after riddled statement written in a way that these observatory statements seem to be open to various interpretations. While we cannot be sure that Heraclitus wrote what Diogenes claims, if we believe that these are legitimate fragments of Heraclitus, their insights are certainly up for serious consideration.

Heraclitus is well known for his suggestion of what the universe is, and for him, the universe was an ever-changing subjective reality, held within the logos in a fluctuating fire.

The word logos itself has a coded representation. Some consider logos “the word,” but for Heraclitus, it was likely much more.

All things that take place or come to be done so in accordance with logos (fragment 10.1), which are common (fragment 10.2) both because it applies everywhere and also because it is objective, and so is available to all humans.

Logos is distinct from what people, even Heraclitus, say or think (fragment 10.47). It is not a word, statement, account, or opinion but rather a true principle. By “the word,” Heraclitus likely suggests that it is as common and understood as any other named object. It is grounded by human commonality and the ability to reason.

Yet he believed that humans would not understand it, both before and after hearing its existence. It can be a challenge to understand this importance since we don’t often know what we don’t know, or better yet, we don’t need to know something for it to be. The rock is a rock because that is its name, its word. Even so, rock-ness has existed much longer than its name.

Other names for logos include “formula,” “measure,” and “reckoning.” Although Heraclitus offers various meanings of logos, the idea of its interaction in principle genuinely stood for an all-encompassing harmonia, yin, and yang.

The rock exists because somewhere else, the rock does not exist.

Heraclitus’s many fragments explain the concept of objects and ideas taken together by being whole and not whole, being brought together and apart, in tune and out. Out of all things, there comes unity, and out of unity, all things. (fragment 10:38). For this reason, logos could stand in percussive relation to modern scientific developments.

Let's consider the law of mass-energy conservation as proposed by Einstein in the early 19th century.

In Einstein’s law of mass-energy, we can find these same logos ideas are held within the compressed explanations of its development. In 1785, Antoine Lavoisier, the father of modern chemistry, proposed that matter is neither created nor destroyed. Then in 1842, we came to understand that energy is neither created nor destroyed as proposed by Julius Robert Mayer. These conservation ideas are often referred to as a “closed system.” Such a system could be perceived as Heraclitus’s view of time and the becoming, where the instant was a closed duality of balance and contingency.

In 1905, what has only been attributed as a recall of knowledge, Albert Einstein, proposed his mathematical formula E=mc2, which states that the total amount of mass and energy in the universe is constant. Also known as equivalence, the idea for Einstein represented a constant connection of the two properties, mass and energy. More specifically, mass as a property of all energy and energy as a property of all mass.

A balance in metaphysical anti-realism and subjective realities leads to Einstein’s suggestion of a fourth dimension allocated as time. When removed from a system, energy is retained and then added to any other system that absorbs it. Heraclitus may have presented this same idea in his ramblings;

immortal mortals, mortal immortals, living the death of others and dying their life (fragment 10.89).

It is a statement that offers a circular exchange of logos unlimited, as it is always present, never fading, only exchanged.

It is that understanding that the particulars of the universe must be contained by unity, like how the destruction of other energy creates energy because it is returned for further use. Yet never loses its capacity and is in constant exchange. Looking at the universe as a closed system that contains the logos, we may see energy being dispersed. In fact, Heraclitus considered the fire to be the logos. Perhaps that was simply because it was the best “word” for explaining such a concept during a time when Homeric learning would have one believe in attributing such actions with the gods.

Heraclitus gods were of war,

“War is the father of all and king of all, and some he reveals as gods, others as men, one he makes slaves, others free.”

This war was his logos. The fire envelopes carnage as it extracts life from organic material, creating emitted light that continuously agitates one’s kykeon (from the Greek “to mix, stir”). While we are busy discussing whether the logos exist, there it is already persisting.

For fire will advance and judge and convict all things (fragment 10.84).

Heraclitus saw the fire as relatable evidence toward the principle of logos. This idea would come to be related as the flux, an ever-changing experience of life, where the same thing is both living and dead, and the waking and sleeping, and young and old. For these things transformed are those, and those transformed back again are these.

Mass-energy is in all because it is almost certain that one cannot pursue the notion of this existence as much as one could decipher the point of any circle being the beginning or the end of its circumference. Once a theory cannot be agreed upon in science and evidence is proposed for either side of the argument, we revert to philosophy for extended reflection.

According to Heraclitus, all things flow because of the observation of nature and the changes in society he lived in. Yet if all changes are irregular, science is impossible. If science exists, then there are regularities. (Physical, Metaphysical And Logical Thoughts About The Wave Equation And The Symmetry Of Space-Time pg.1-4). Differentials of this ever-changing world, however, refuted are by the existence of the logos and unifying one. We step into and do not step into the same rivers (fragment 10.66). In general, everything is in a state of becoming and flux, and nothing is stable. But there is one substance that persists out of which these things have evolved. Although the waters change, the rivers remain the same. Heraclitus understands change does also support constancy.

The state of conversions we consider now is much more general than the laws of motion. We now consider a homogeneous whole. Even in science, the laws of conservation hold true in physics and chemistry. Heraclitus understood that continuous imperceptible change is an inference from the observer doing the observation of “flux.”

The bow and lyre appear static to the eyes, but if the string snapped, that would be only the consequence of what the man whose mind was not “barbarian” would have known all the time. They are at odds with the logos, with which, above all, they are in continuous contact, and the things they meet every day appear strange to them. (Fragment 10.8)

The philosopher Zeno offers us another way to understand movement. He begins by proposing that the arrow occupies a space equal to its own size at any moment.

Something that occupies a space equal to its own size is at rest.

Therefore, the arrow is at rest at each moment.

But that would suggest movement is impossible, that our senses are not to be trusted, and that the only truth is “being.” Although these philosophers and scientists do not disagree that there is a one and a unity consisting of the universe, they insist that there is only that. That what is is, and what is not – is not. This concept is an objective reality based on necessity, the mind. It is limited to only what is and exists outside of time. This is simply because the past, present, and future are the same. Heraclitus stated that the logos is Parmenides “One.” Einstein may, however, suggest that without the change and exchange of the particulars, how would we ever know if what is true - is?

Enders, Peter. "Physical, Metaphysical And Logical Thoughts About The Wave Equation And The Symmetry Of Space-Time."Apeiron: Studies In Infinite Nature. 18.4 (2011): 203-221.

All writings are open for peer review and contributions. Visit the remote origin to propose changes in a version controlled platform.